Hometown Heros are Among us This Holiday Season

You may know them as colleagues, but to their neighbours, family and friends, they are Hometown Heros working to advance and protect communities, close to home and across the country. 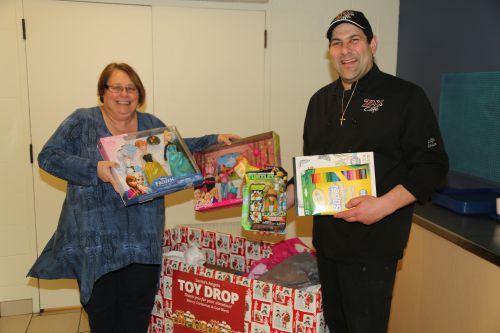 On December 25, Kenny Zakem of Zak's Cafe and his team of Santa’s Angels, will deliver cheer to about 300 homes.

Each year, provincial government employees demonstrate huge Christmas spirit in support of the Santa's Angels cause. Zakem says that he is constantly handed envelopes by employees with proceeds from some sort of fundraising event. The large gift bin at Zax is also filled over and over again.

For the past four years, Terry Woodhouse of ITSS has been one of the many employees who quietly hands Zakem an envelope. Terry and her husband Gary live on the Campbell Road in Johnston's River. At Christmastime, their home is anything but quiet as it is transformed into an outdoor Christmas light and music show. The Woodhouse couple passes along any donations from the show to Santa's Angels. Terry estimates they have received about $2,000 in donations since 2012 and expects 2017 to be bigger than ever.

Just turn off the Red Point Road onto the Campbell Road and look for the lights. You can't miss it.

As of 2014, Santa's Angels became an officially registered charity. The organization was founded in 2004 by Kenny Zakem, Father Stephen Allen and Don Wright. Santa and his elves make home visits in the Charlottetown area, Stratford and Cornwall as well as visits to patients at the Queen Elizabeth Hospital, Sherwood Home, Mount Herbert Addiction Treatment Centre, group homes and seniors' homes.

Staff honour the memory of friend and co-worker

To the right of the entrance is an angel with a halo. Carragher and MacMurdo look at it and smile.

“Earlier this year, we lost a member of our staff in the physio department. She was killed in a vehicle collision in January. It was a devastating loss to our department. And we wanted to do something special to remember her in a tangible way,” explained Carragher.

The angel is a new addition to the hospital’s Light’s for Life display.

Carragher continued, “We all pitched in to donate to the hospital foundation in her memory. It’s very poignant to see it here. We wanted this to be a happy time. She wouldn’t want us to be sad. She would have wanted us to celebrate her.”

Reprinted from the Journal Pioneer, December 6, 2017